Cannabis—in particular, hemp—has been grown as an industrial crop in the United States since the Colonial Era. British colonies were bound by law to grow hemp for the crown. In fact, you could use hemp to pay your taxes for a time, and both President Washington and President Jefferson grew hemp, encouraging citizens to do the same. Hemp was such a commodity because of its strength and durability. It was used to make paper, rope, and lantern oil, among other things. Because of its resistance to mildew and mold, it was also important for maritime use and was used to create the lines, sails, and caulking of ships, including the Mayflower.


Medicinal cannabis is also a big part of United States’ history, making its first appearance in US Pharmacopeia in 1850. George Washington’s agricultural ledgers even suggest he grew cannabis with high tetrahydrocannabinol (THC) content for medicinal purposes.


Despite its established industrial usefulness and therapeutic value, local governments have been regulating cannabis as far back as the 1860s, and the federal government began moving in that direction in 1906. In 1937, the Marihuana Tax Act officially turned the United States toward full cannabis prohibition, taking both industrial hemp and medicinal cannabis with it.

Behind the Scenes of the Marihuana Tax Act of 1937

To understand how cannabis prohibition happened in the United States, we must take a step back and look at the people and situations involved at the time.

At the time, Andrew Mellon was the Secretary of the Treasury. He was also the wealthiest person in the United States, and he was heavily invested in DuPont, who had just developed nylon in direct competition to hemp-based textiles.


Additionally, media mogul William Randolph Hearst was feeling threatened by hemp as it was quickly becoming a cheaper alternative to the paper pulp his logging and timber investments produced. Plus, radical headlines about this “devil plant” would sell more of his newspapers than milder content would. 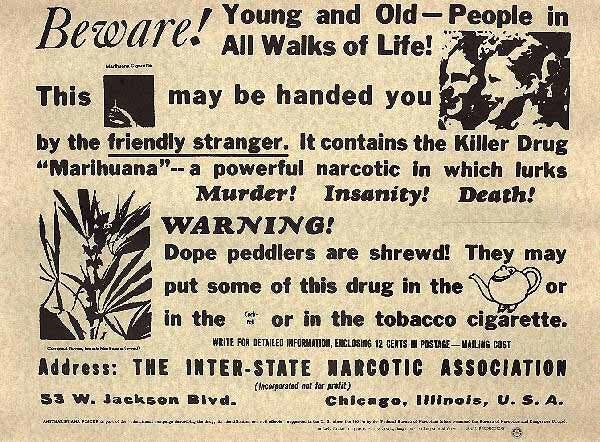 Most important in the history of cannabis prohibition is Harry J. Anslinger. He started working for the government in the Department of Prohibition. Known for his ruthless approach, he eventually worked his way up the ranks, leading to his appointment as the first Commissioner of the newly-formed Federal Bureau of Narcotics. Cannabis wasn’t initially a concern of his, but when alcohol Prohibition ended in 1933, his new department became unnecessary and he worried he’d be out of a job. Thus, he turned his department’s attention to a new substance to prohibit—cannabis.

During the 1910s and 1920s, the United States experienced a surge of Mexican immigrants fleeing violence and unrest from the Mexican Revolution. They introduced Americans to smoking cannabis recreationally, and the method spread quickly throughout the country. Bear in mind, that wasn’t an issue until Anslinger and his department decided to make it one. (There’s a reason the scientific term “cannabis” was replaced with “marihuana” and “marijuana”—to imply an association between cannabis and Spanish-speaking minorities.)

On top of that, alcohol Prohibition ended in 1933, and that was fueled by its own bigoted agenda. Groups like the Anti-Saloon League and the Ku Klux Klan worked together to enforce the prohibitive laws by raiding and torching speakeasies and burning crosses in yards. Their main targets: immigrants.


Not to mention the personal and political motivations behind the influencers. Hearst, for example, was known to use his papers to portray immigrants and minorities negatively. He particularly targeted Mexicans, blaming them for his loss of 800,000 acres of timberland to Pancho Villa. And here again, the more extreme he could make his headlines in regards to minorities and immigrants, the more newspapers he sold. 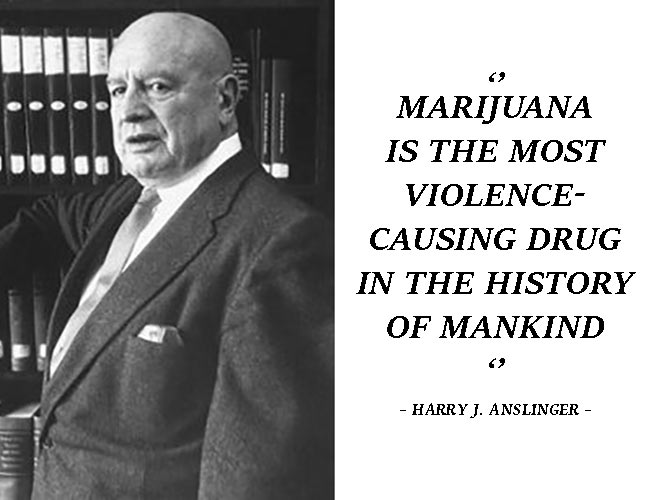 Keeping all this in mind, there’s one other important factor to remember—with the end of Prohibition, Anslinger’s new government department needed something else to do to avoid being obsolete. So, within this perfect storm of political tension, racial divide, and money to be made, Anslinger seized the moment. Cannabis and cannabis users—who Anslinger decided to portray as only minorities and immigrants—became the new public enemy.

Rules of the Marihuana Tax Act of 1937

The Marihuana Tax Act didn’t prohibit cannabis necessarily. But, with Anslinger’s department set on eradicating cannabis and its partakers, it made it very expensive to be involved with cannabis in any capacity. It didn’t just target growers, manufacturers, and producers. It targeted everyone, including healthcare professionals, who at that point had been leading the way on studying cannabis’s medicinal uses. Here’s the gist of the law:


SEC. 2. (a) Every person who imports, manufactures, produces, compounds, sells, deals in, dispenses, prescribes, administers, or gives away marihuana shall […] pay the following special taxes respectively:


The taxes listed were too high for most people involved in the industry to pay them, but if you didn’t, you were a criminal. And so, cannabis as an illegal substance was born.

The Marihuana Tax Act stood until 1969 when the Supreme Court overturned it in Leary v. United States. The court ruled the law unconstitutional because you had to incriminate yourself to pay your cannabis taxes. 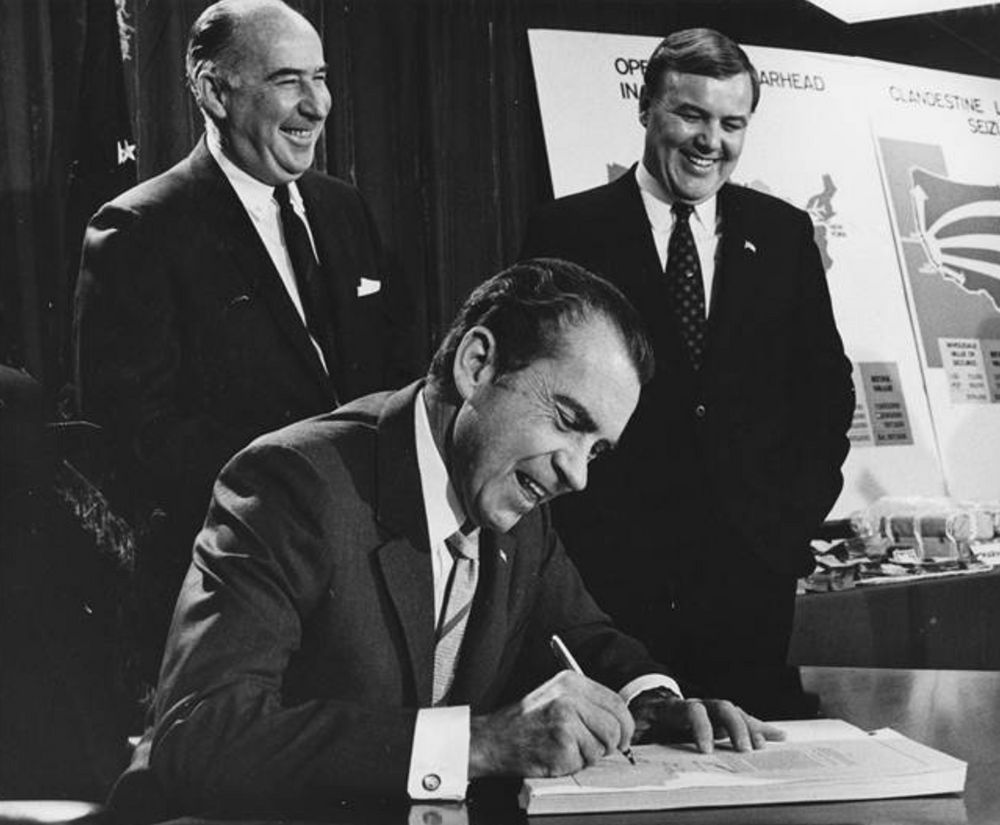 But, that victory didn’t last long, with the Controlled Substances Act passing in 1970. That Act listed cannabis—including its non-intoxicating form, hemp—as a Schedule I substance, claiming it had “no currently accepted medical use and a high potential for abuse.” It’s still in effect today, despite there being only four states left that haven’t passed some sort of accessible cannabis legislation, whether that be decriminalizing it, offering it medically, or going full recreational.

In 2014, the Farm Bill was signed, allowing states and institutes of higher education to cultivate industrial hemp (cannabis with less than 0.3% THC) without a permit from the Drug Enforcement Administration, as long as their state law permitted it. This brought hemp cultivation back to the United States, with the 2018 Farm Bill furthering progress by removing hemp from the controlled substances list and legalizing it as an agricultural commodity. Looking to the Future

The passage of these newer laws allows us to re-introduce ourselves to the possibilities and opportunities that are achievable through cannabis. Not only are we able to pick back up on the industrial side of things, but we’re now also able to dive further into the medicinal side of things.


It’s taken us a long time to get back here, but we’re beginning to re-learn that cannabis is more than an industrial powerhouse. Even in its non-intoxicating form of hemp, its phytonutrients can be extracted to create therapeutic, whole-spectrum products known to help with a variety of issues. And as legislation and research progress, the list of things cannabis can help with is sure to grow.

What is Whole Spectrum Hemp Extract?