Farmers like to keep an eye on the sky. The ever-evolving dance of sun, clouds and rain hints at the best time to plant and how much to irrigate a crop. But when that crop is industrial hemp, as was the case for owner-operator Frances Tacy of Franny’s Farm in Leicester last year, the sky might hold more than the usual significance.

“In order to get your permit, you have to give the [U.S. Drug Enforcement Administration] the exact GPS coordinates of your plot,” Tacy explains. “Therefore, they liked to come visit us at a level so close to the ground I could see their faces and wave. I could’ve talked to them when I was up on the top of the ridge.”

North Carolina laid the legal groundwork for industrial hemp cultivation in 2015, and during their flyovers of Franny’s Farm, those DEA agents did little more than look. Nonetheless, their presence served as a reminder of the challenges Tacy’s initial crop faced. Because industrial hemp belongs to the same species as marijuana, the federal government still considers it a Schedule I narcotic, though federal law does allow state-regulated pilot programs for hemp cultivation. And as Mountain Xpress reported last June, the N.C. Industrial Hemp Commission’s concern about potential DEA enforcement efforts prevented local farmers from getting their seeds in the ground until June, well past the ideal planting time.

Together with the novelty of industrial hemp as a crop in this state, that late start made the success of last year’s planting highly uncertain. For Tacy and other local growers, however, the number of pounds of product pulled from the fields was less important than the yield of knowledge. “It’s the first time industrial hemp has been planted in Western North Carolina, so this first year was all about experimentation,” she says.

Making up for lost time

Perhaps the biggest question was how to compensate for the monthlong delay in planting. Asheville native Brian Bullman, co-founder of the Carolina Hemp Co. in Woodfin, tackled the challenge with a labor-intensive approach: Each of his 6,500 plants was placed in the ground by hand.

“We didn’t have the opportunity to step the plants up from their starter trays to planting cups, so they were at a disadvantage right out of the gate,” says Bullman. “We took the time to individually cultivate 6,500 holes, moving rocks and roots and making the best root-soil contact as possible.” That also left much of the existing grass in his fields intact, helping to prevent soil runoff and improve water retention.

Despite those benefits, however, the hemp plants showed more variability than was desired. “We had some that were 5 feet tall, 4-5 feet in diameter, and some that were 1 1/2 feet tall with just one stem sticking out of the ground,” Bullman reveals. Nevertheless, he considers his average yield — a little less than half a pound of dried flower and leaf material per plant — to be a good result for a first-year operation.

Accordingly, Bullman is bullish about the prospects for this year’s crop. Based on how things played out last year, he’s not expecting any problems with the DEA, and meanwhile, field preparation is already underway, with planting slated for mid-to-late May. “We’ve diversified our plant with several different strains, and the clones will be much more established when they go in the fields,” he says, adding, “We anticipate a much better yield.”

Jeanine Davis, extension specialist at the Mountain Horticultural Crops Research and Extension Center in Mills River, relied on intensive field preparation to offset the late start on her research plots. “There’s an idea that hemp will just grow itself — that you can throw it out on any kind of waste field,” she notes. “It’ll grow, but if you want it to make money for you, you need to treat it like you would any other crop.” Each of her plots contained multiple varieties.

Davis and her colleagues tilled their fields for weed control, fertilized based on recommendations for corn and turned to irrigation to support the vulnerable young hemp plants during a stretch of hot, dry summer weather. As a result, she says, “People told me we had the best-looking crop in the whole state.”

Local farmers now know that they can produce hemp even under suboptimal conditions, but Davis stresses that more research is needed on the finer points. Many of the varieties being grown in North Carolina were originally developed in Canada, where industrial hemp has been legal since 1998, but those strains may behave differently in the Tar Heel State’s warmer, lower-latitude environment.

Two of the varieties in Davis’ plots, for example, had been certified as containing less than 0.3 percent tetrahydrocannabinol, the highest concentration allowed. Yet when she analyzed last year’s harvest, those varieties tested above the legal limit for THC (the main psychoactive component of marijuana), forcing her to sacrifice all of those plants.

“We don’t understand why that happened; we just don’t have enough information yet,” says Davis. “As a researcher, it’s OK if I have to destroy a crop, but what if you were a farmer and planted 10 acres of that variety?”

The potential impacts of insect pests and diseases are also mostly unknown at this point. And though none of the fields Davis examined showed major problems along those lines, she did see evidence of issues such as downy mildew, corn earworms, Japanese beetles and leaf miners. “If we see those things in year one, we know the potential is there, so we need to get ready,” she points out.

And should those problems strike in force, industrial hemp farmers would have little recourse. Due to the crop’s limited legality at the national level, the Environmental Protection Agency hasn’t approved any pesticides or herbicides for use on it. Hemp-growing states have the option of approving a limited selection of chemicals, primarily those used by organic farmers, but North Carolina has yet to take such action.

“I’m asking that we start that process, so we have at least something for our growers to use,” Davis explains. “Right now, I have to say there’s nothing, and that’s frustrating for all of us.” 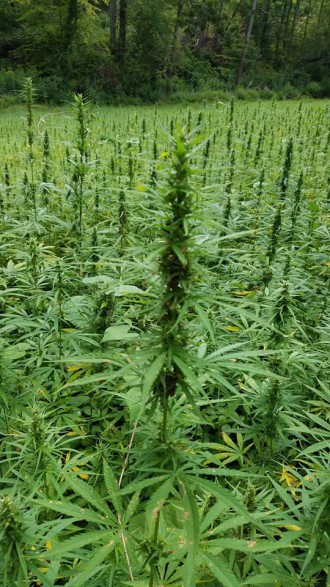 CANNABINOID CROP: At Franny’s Farm in Leicester, industrial hemp made a good first showing in the field, despite getting a late start on the growing season. Photo courtesy of Frances Tacy

The consumption side of the industry also offers significant possibilities to explore. The yield from Franny’s Farm, Tacy explains, was split up among a wide array of end uses. “My objective is to figure out how hemp can be a viable enterprise for small farms that can grow between 1 and 5 acres,” she says. “I’m all about identifying sustainable avenues for this crop so that the farmer can make money.”

Tacy’s seeds, for example, were cold-pressed to produce oil, rolled with cocoa into hemp power balls, and included in collaborations with the Asheville Tea Co. and Asheville Bee Charmer. Her hemp fiber, meanwhile, was processed, or “retted,” using two different methods before being sent to a group of weavers in Raleigh. “This is the first time, in N.C. and possibly anywhere, that weavers have been supplied with different varieties that have been grown and processed in different ways, to find out what the results are,” she notes.

And looking ahead, continues Tacy, “We will be planting in early to mid-May this year as we watch the weather for supporting conditions. As the research model for small-scale sustainable farming, it is a best practice to plant during supporting weather and moon cycles. All of us researchers anticipate better results from an earlier planting.”

For his part, Bullman is focusing on hemp flower extracts, which his customers commonly use to treat anxiety and other conditions. His company is developing a range of sublingual oils in different concentrations, some of them also containing botanicals such as valerian root and lemon grass. “Because we suggest that folks dose two times a day initially, we’re creating specific morning and evening blends,” he explains. “It’s an opportunity to introduce another layer of function besides general wellness.”

And while Davis, too, is optimistic about hemp’s potential for area farmers, she reminds those interested in growing the crop that the industry is still in its infancy. “Don’t cash in your 401(k) — it’s going to take us awhile to figure this all out.”

Celebrate with us on Grand Opening day!